‘Hello, how are you? I am Beija Flo and I’m mainly a singer, but I’m also an artist, poet and photographer. I talk about women’s sexual health a lot. Which means I also talk about vaginas a lot. This is mainly because I don’t have one,” posts Essex born, Liverpool based musician Beija Flo online. […]

‘Hello, how are you? I am Beija Flo and I’m mainly a singer, but I’m also an artist, poet and photographer. I talk about women’s sexual health a lot. Which means I also talk about vaginas a lot. This is mainly because I don’t have one,” posts Essex born, Liverpool based musician Beija Flo online.

A quick inbox to see if Beija would like to be interviewed prompts an equally rapid response and two days later we’re at the beginning of a three hour chat in Beija’s shared Toxteth terrace. Broken mannequins look on as towelled housemates jolt apologetically from the bathroom (quirkily adjoined to Beija’s front room.) Running bathwater provides a meditative soundtrack.

Beija’s MRKH syndrome means she was born without a vagina, womb and cervix. She doesn’t have periods, can never be pregnant and can’t currently have sex.

“One day I will do this thing called Dilation Treatment, which is basically stretching your fanny with heavy, medical looking dildos. You know, so you can do ‘the deed’,” says Beija. Since being diagnosed at 17, Beija has also developed anxiety and depression, which she manages with support from her parents, her labelmates at Eggy Records and WHISC – the women’s health and information centre at the top of Bold Street, Liverpool, which offers free resources for women. “Through WHISC I receive six sessions of counselling every three months and in between that I see a lovely lady who is my listening ear.” says Beija.

“Eggy have also helped me in so many different ways mental health wise. I’ve finally found my tribe, plus people like The Secret Circus, they’re another one of my tribes. I can speak openly about everything with them.”

Beija comes across in 3D – friendly and intelligent whilst energetically working through her challenges in real time, attempting to make sense of it all with each sentence. 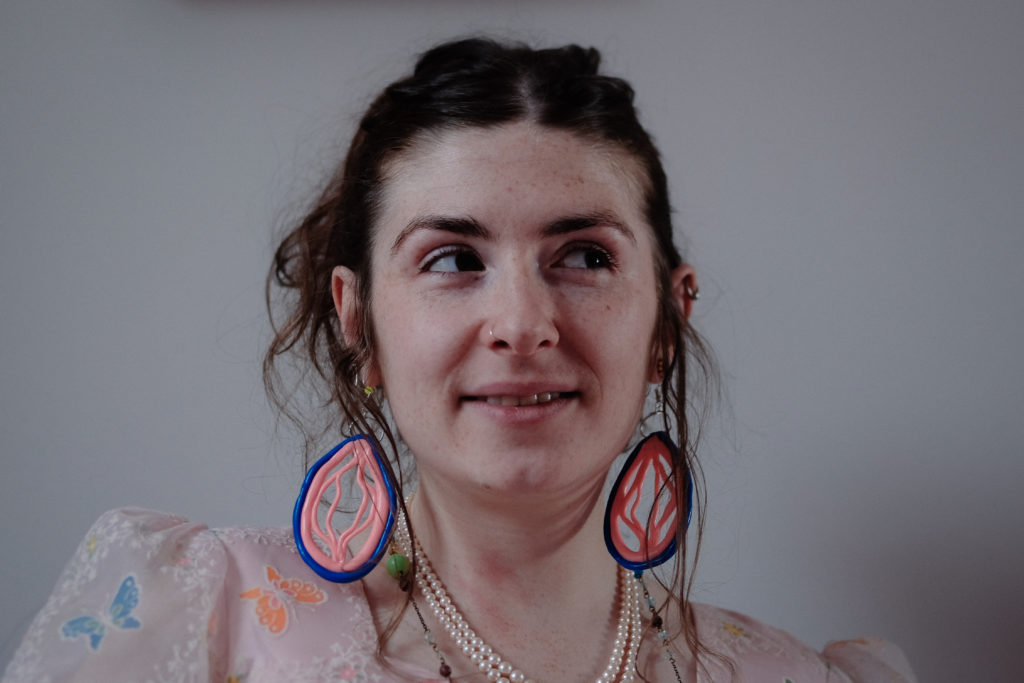 “It’s been a slow snowball since my diagnosis and at the moment I’m not actually in a very good place with my wellbeing, I have to seek extra help a lot as I don’t really look after myself. I don’t feel I want to be here a lot of the time.

In this moment of rawness, I check to see if Beija’s safe – asking if she feels suicidal now? “I don’t really like the word suicidal because it kind of sounds like I’m going to do something about it and to be honest I wouldn’t have the guts and there are far too many people I love to do that to them.”

I sense that whilst Beija is struggling mentally, she has a sense of purpose in life – to use her art as a platform to raise awareness for MRKH.

“Definitely. I don’t see it as an option. I can’t sit by. I mean I don’t consider myself to be dealing with it brilliantly but in the grand scheme of things of dealing with MRKH, I am smashing it out the park.

“So many women don’t talk about it. I want women to feel unashamed.”

“Some great ladies made like a Facebook for women who had MRKH syndrome but it’s not really spoke about enough.

“It’s really important to express it. For me, it’s through songs obviously, and poetry and drawings. I have this big thing where like everyone in the whole world needs to know how I feel about everything. I don’t have a choice on that and I don’t know why, it’s like I’ll write personal songs and close friends and family are a bit like ‘you’re sharing a lot there Beija, are you sure you want to do that?’ and I’m like, well, yeah. 100%. I think it’s important for people to know that you’re struggling and things aren’t ok. It’s also helpful to try new things. I started swimming and exercising and if you told me that when I was younger … I would have been like fuck off, like no way.”

We end the interview talking about Beija’s musical influences. “Rufus Wainwright was a big part of my growing up and I love words. I love Tom Waits, my favourite album is The Black Rider which is just like stories, I love story albums and I like The Point by Harry Nilsson.” As an artist who puts so much of herself into her practice, Beija is adding to the great lineage of lyric-led alt-pop. If her early work is anything to go by, she’ll soon sit comfortably alongside her songwriting idols Nilsson and Waits, almost in spite of the unfortunate hand nature has dealt her.