In 1998 hip-hop clocked the ripe old age of 25. The 90s had been a bit of a rocky period for the genre; dizzying commercial and critical highs offset by a number of tragic deaths for some of its brightest stars. The music had generally become quite mainstream, but one group returned the genre to […]

In 1998 hip-hop clocked the ripe old age of 25. The 90s had been a bit of a rocky period for the genre; dizzying commercial and critical highs offset by a number of tragic deaths for some of its brightest stars. The music had generally become quite mainstream, but one group returned the genre to the foundations it was built. Old school rhymes (with new school skills), traded bar for bar in ways similar to the Treacherous Three and the Furious Five, the DJ role once again instrumental, with a dizzying blend of old funk breaks and disco staples.

This 70s NYC aesthetic wasn’t being pushed forward by any residents of the five boroughs, but instead by a collective a few thousand miles to the west, the darlings of the West Coast underground scene, Jurassic 5. They weren’t the only artists looking fondly at the past to reinvent the present.  A few thousand miles across the Atlantic, a handful of DJs based in the south of England were doing much the same. A similar sample base was sped up and turbocharged with vocal snippets from the past, all part of a block-rocking scene known as Big Beat, a sound which would eventually turn into nu skool breaks and help Fatboy Slim become the biggest pop star the UK dance music scene had ever seen.

One of 1998’s standout releases from that time period was Krafty Kuts’ ‘Funky Elements’ EP, and as breakbeat re-emerged as a staple worthy of competing with the more standard four-four tackle in the UK club scene, he become one of the genre’s brightest stars. These two music scenes – miles apart in geography but united by a shared love for the original vibes Kool Herc gave us back in 1973 – would eventually collide directly when J5’s enigmatic frontman, Chali 2na, became a Kuts collaborator.

The duo created music together, toured, and have recently released their debut LP ‘Adventures of a Reluctant Superhero’. Hip-hop is now closer to 50 yet many of the community’s issues still remain. The two veterans, both worthy torch-bearers for everything that the music stood for from its inception, have created an album built on Krafty’s appreciation for a killer break and Chali’s gloriously infectious raspy baritone. 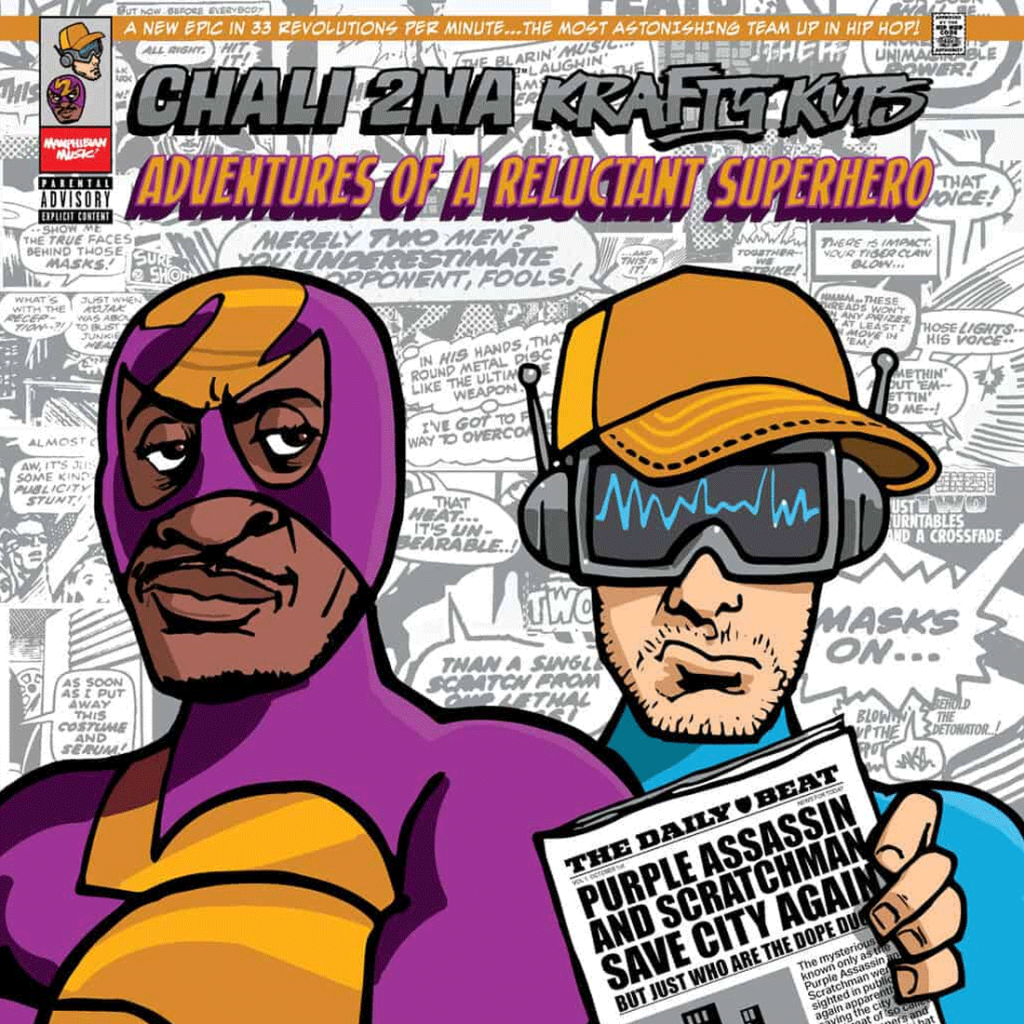 We caught up with Chali to discuss how the pair started working together, how best to keep your head straight on tour and how mental health is addressed in the industry…

You two have toured and worked together before but am I right in thinking this is your first album together? Can you explain some of the backstory about how you started collaborating?

We met through a mutual friend named Nick Middleton from The Funk Hunters. Both of us were on tour through England and had a day off and went to visit Krafty at his studio. He had been trying to get me some music and finally got the music to me through Nick Middleton. Once we got to the studio we played around with the song and within an hour or so we created the tune, ‘Hands High.’ We liked how fast and efficient each other worked so we figured we’d do more in the future and here we are today.

Tell us about the concept of the album, is it about you two saving the genre?

It’s not so much about us saving the genre than it is about us realising that the talents that we possess are actually superpowers and we have a choice in using these powers for good or for evil, or to even use them at all. Some of us are more reluctant than others if you catch my drift.

Both of your work has always looked back, J5 focused on bringing back old school traditions and Krafty’s always leant on a block party aesthetic with the way he DJ’s. The best hiphop has always raided the past for its inspiration, why do you think that this is such a consistent formula within the genre?

There’s a real simple answer to that. If you don’t know your past, then you don’t know your future. I’ve always heard that there is nothing new under the sun – it’s just about how a person interprets it and how a consumer sees it from their perspective.

As a genre Hip-hop has definitely matured in recent years with its lyrical approach to subjects like sexism and homophobia, but I feel like it’s always been talking about mental health. When you look at tracks like the Geto Boys’ ‘Mind Playing Tricks on Me’ and Inspektah Decks incredible verse on ‘CREAM’, rappers have always been focused on it. Even Eminem’s cartoon insanity.

Do you think hip-hop has a strong connection with improving mental health? Or do you think the whole nature of sport and competition it promotes with battling and so on has done more harm than good?

Rap has always been a reflection of what’s going on around it. That being said you will get songs like ‘My Mind Is Playing Tricks On Me’ etc, simply because there are people who exist who have mental health issues. When you hear songs like these usually it’s because the person who is singing the song has actually experienced some if not all of these situations. So, it’s hard to say if rap has done more harm than good in this area. That all falls under a person’s perspective – it’s almost like saying have people’s exposure to mirrors helped their existence or hurt it?

How much do you have to do to secure your mental health within music? Do you feel tested by the strains of touring, social media and other aspects?

Mental health comes before the music. It’s more important to feel good about yourself and your health than to be an entertainer. That’s just my opinion. I feel like social media is an illusion and a distraction. I try not to buy into it the way I see other people buying into it. But again, this is just my perspective. Touring I still love so you may be asking the wrong person about that one.

Getting political for a second, a big issue stateside right now appears to be Donald Trump’s casual referencing of mental health in regards to the recent tragic shootings. Do you feel that he’s exploiting this to hide from real issues, and how much damage does a lack of understanding of illness presented in this way cause?

The level of racism in this country clouds that question in regard to how Donald Trump casually handles mental health issues. There are more people of colour murdered here in America over small confrontations with police daily. While public places are being shot up and innocent civilians murdered by white privileged and disgruntled males who are handled with care, when apprehended and portrayed as victims of mental health when they should be labelled terrorist. This plays into Trump’s agenda to separate Americans and it explains why he’s nonchalant when speaking about this. Again, this is just my opinion.

Finally, what advice would you offer any musicians in safeguarding their mental health?

Every person goes through something different and I can’t see what is on a man’s heart. I try to remain a person who does not necessarily judge and I try to continue to stay as focused on the task at hand and as immersed in the fun aspects of it as possible.

Max Pope – Going Through The Emotions

Gengahr – Going Through The Emotions

Anthony LaMarca – Going Through The Emotions

Hayden Thorpe – Going Through The Emotions

LIFE – Going Through The Emotions

The Wants – Going Through The Emotions