Jess Sigsworth 'always on the up' - The Mind Map
Close

Jess Sigsworth ‘always on the up’

“I was in such a dark place and I struggled to get up in the morning.”

We caught up with Manchester United Forward Jess, as she talked us through overcoming injury, her thoughts on the Women’s World Cup, and advice for young athletes.

You started your football career at a young age – how did you get into playing?

I started out playing for a local boy’s team, my twin brother played for them.

When he was training, I used to watch. One day the manager asked me if I wanted to join in.

It just went on from there really.

Were you encouraged at school to play? As a girl wanting to play football, did you find it difficult to fit in with the boys?

When I got to school, I was encouraged quite a bit, hanging around with the boys team. 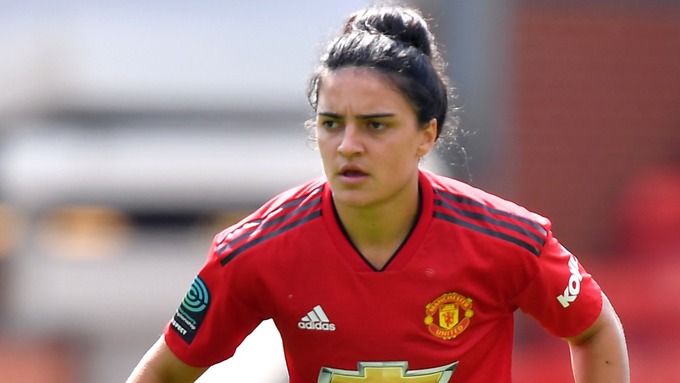 The 2018/2019 season saw multiple achievements for yourself and United as a whole. Has this success inspired you to put yourself up for a spot on the England national team?

I really hope so. One day I want to play for the seniors.

United manager [and former England captain] Casey Stoney has spoken about using team building and personal development off the pitch to help the team connect. Can you tell us more about that?

She tries to put us out of our comfort zone.

We’ve had to hold snakes, boxing at 6am, army camps, ropes courses.

Even people who are scared of heights had to walk on high wires!

It helps you bond with your teammates!

How do you think these actives have helped your own personal development as a player?

I’m a laid back player, which allows me to help others who are struggling.

What does your training and nutritional regimes look like as a professional athlete?

We train every day except Thursday. On Monday we have a recovery day.

Maybe three or four times a week we’ll be in the gym.

The nutrition part is important, carbohydrates, for when you need energy, getting your proteins on board.

How do you balance that with your off days? Do you manage to get treats in here and there?

Sometimes we go out for a milkshake, a really unhealthy one with Milky Bar.

I think it is important to balance it out with stuff like that.

You tore your anterior cruciate ligament (ACL) a few years back, which can be tough to recover from and sometimes costs players their career. Can you tell us what the experience was like for you?

It happened when I was at Doncaster. I had to wait about two or three months for my first surgery.

Unfortunately it didn’t go great at all.

I just knew after my first few months of rehab that something wasn’t quite right, so I had quite a bit more done to it.

From there, I didn’t miss a session and I did work with some top physiotherapists.

That’s when I could see the light at the end of the tunnel.

Ever since then I’ve never had any problems or pain and it feels great.

It was so tough.

But, when you know it’s getting a little bit better, that motivates you.

Has recovering from a serious injury been the toughest challenge for you so far?

Yeah, you never think it’s going to happen to you, it’s not just the physical side, but the mental side.

When you were at Doncaster, and now at United, did you have support from these clubs in terms of looking after your mental health?

We never had that at Doncaster, but at United we have a psychologist, Lorna.

My friend Martha [Harris, defender] got an injury recently.

She had spoken to Lorna quite a while back, about what she would want put in place.

Now, she’s got a programme, she knows what she’s doing every day and that’s really helping her.

We have such good support around us, if anything like an injury does happen.

You continued on your path towards a career in football while also studying for a degree at university.

How did you find a balance between playing on top form and studying hard?

It was actually really hard. At the time, I was playing for Doncaster and the university team.

I had all of my university work on top.

Any time where I didn’t have lectures, I was catching up with studying.

The university were understanding, offering support or extensions on my coursework.

That took the pressure and stress out of of it all a bit more.

What would be your advice to girls who dream of a career in football?

The main thing to start with is to fully enjoy it.

If you don’t enjoy it when you’re younger, there’s no point carrying it on.

You will get the best out of yourself if you are dedicated and motivated.

I think that will take you quite far.

If you do make it far, I think the main thing is not be distracted, like always going out with friends.

Sometimes you can’t do both, and when I was growing up I never used to go out.

The only thing I wanted to do was play football.

Have you always been a disciplined person?

Yeah, I’ve always wanted to be the best that I can be.

Now that I’ve come to Manchester United, sometimes we go out for meals.

We don’t have to drink to have a good time.

Now that United have been promoted to the Women’s Super League, what is the team mentality like going into this new season in the top tier?

We are all fighting for our places in the team now, and that brings everyone’s game up a bit more.

Do you expect to see any increase in league attendance numbers now that the Women’s World Cup has dominated the summer and peaked an interest in the women’s game?

Yeah, we’ll get good attendance off the back of the World Cup.

The quality of the football was great, so more people will watch.

People will want to see what it’s all about.

Hopefully, we can bring all the excitement of the World Cup into the league.

What kind of television, films, and music do you enjoy off the pitch?

I love stuff like ‘Love Island’ and ‘The Only Way is Essex’!

In terms of music, I just love going to festivals.

Luckily, most festivals are on during summer. That works out great.

What does ace mental health mean for you?

Being both physically and mentally healthy.

There’s no point in your body being healthy if your mind isn’t healthy too.

You won’t be in the right place.

What are your personal goals going into the new season?

Just to secure a starting eleven place,  and perform consistently throughout the season.

I want to always be improving and never be going backwards.

Always on the up.