The inner monologue of Joe Gilgun

You have to practice talking about your feelings.

I had the chance to sit and have a toastie with Joe in his flat in Manchester.

Louis: Do you think the ‘stiff upper lip’ attitude towards men and mental health is becoming outdated?

Joe: Definitely, the tide is starting to change.

Men are now more open to wanting to talk about it.

But if you’re in an environment where it isn’t accessible, how are you gonna learn?

Louis: Do you think that’s probably lots to do with both toxic masculinity and genetics?

‘ They fuck you up, your mum and dad. They may not mean to, but they do’

‘Man hands on misery to man. It deepens like a coastal shelf.’

All these thoughts and worries that your parents have they pass down.

It’s almost like you can’t figure out why you feel so shit.

I worked with this Jewish guy in America, Matty who was third generation Holocaust and he still had the mentality of trying to survive, just like grandma and granddad did.

There’s nurture and nature. I mean, we have this argument with serial killers all the time. 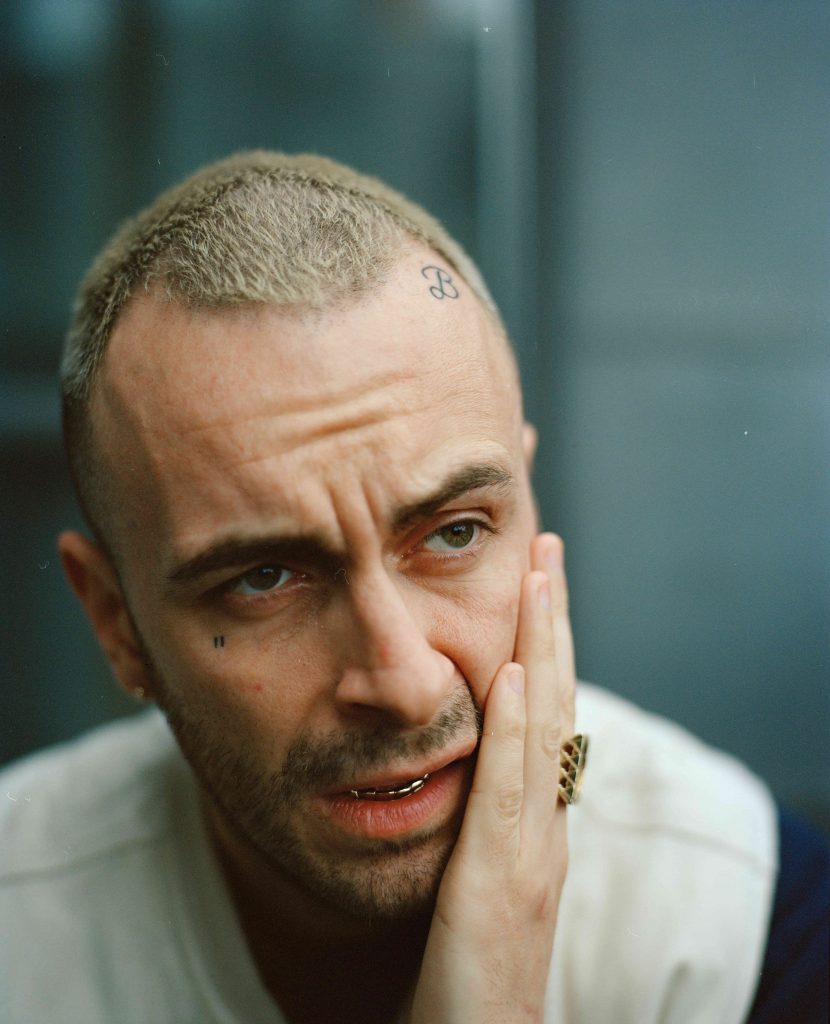 Louis: I spoke to another lad who was experiencing depression.

He puts himself in uncomfortable positions to try get over it.

Louis: Yeah. If you force yourself to get out of bed, there’s good that can come of it!

Joe: But anyone reading this won’t wanna hear that.

Joe: The last thing you wanna hear is that you need to put yourself in the firing line.

Joe: I remember it myself, thinking is it not bad enough now?

People go ‘the lion isn’t in the room’, I’m sorry but it very much is for that human being, it’s very real.

I suffer with anxiety throughout the day.

I’ve had a bit of a melt down this morning.

Louis: So when you’re in that position, what do you do to ease your mind?

Joe: I vent to people that I care about.

I’ve had some bad bipolar days man, it’s not helping that I lost my dad as well.

I’ve been really struggling to deal with that, there is an element of feeling like a fucking paper bag in a hurricane.

Louis: Where are you up to with your acting now?

Joe: I feel naked without acting, the fear I’ve had in the past six years about it, has made me write my own show.

I was like, I better do something, but I can’t be in front of that camera anymore,

So I’ll write and get all these confident people to do what I used to do.

I’m not an easy character, my behaviour isn’t always great.

I do struggle a lot. I have therapy.

It’s taken nearly six years to get to a place where I’ve been able to write the the show.

I’m the creator of the show, and on top of that, now I’m fucking acting in it.

I’m really proud of myself.

Louis: So you’re using it as a drive really, to better yourself?

Joe: Yeah, you’ve got to fight constantly, all the time.

Do something every fucking day.

Like dude, I drag myself out for a brew in the morning but I go alone.

I think if I can’t stand me how can anyone else?

It’s not like I don’t have mates and accessible people, but I will isolate myself.

Louis: Lots of people are introverted. Or you’re either a bit of both, or one or the other..

Joe: I seem to be between the two.

I go out and I get this pointless coffee that I don’t want.

But, I’m sat outside, I’m making an attempt.

When it comes to mental health, it’s about ticking the little things off the list.

I’ve used this, analogy, which is we’re all walking around with these bags of rubbish.

And ultimately what happens is the bag splits, if you’re not offloading it, and sharing it with people.

Louis: Exactly, yeah! Can you tell me a little about your bipolar?

Joe: Some people say “oh I’m having a bit of bipolar”.

Of course they’re not having bipolar, they’re just having a shit day.

They’re almost making a joke of the symptoms.

But I’m cool with that.

If we can get a laugh out of all this sadness, then go for it.

Louis: It normalises it doesn’t it? In a way?

Normalises us, and the truth is we are all incredibly different

I think the trick to it all is just being alright with that.

Louis: Would you say it’s about challenging yourself too?

Joe: Yeah. A pal of mine, his routine was bad.

Sleeping through the day, up all night, but he’s got off his ass and he’s trying, he’s doing his best.

And that is the thing right.

Just leave the house and breathe in some fresh air.

A lot of anxiety is not that easy to fix, not like breaking a bone, it’s gonna take years.

Often a lot of it is child trauma. I’m 35 and still fucking struggling to process some.

I guess I’m lucky because of my job.

It means that I can do therapy.

Because each and every person’s experience is different, talking therapy I feel is the one.

The trouble is, it’s not accessible for everyone.

Louis: I use the NHS for things like medication.

The frightening thing about treating mental health with medicine is it is often trial and error.

A lot of people have tried therapy and not got anything out of it, but they don’t stick it out.

They’ll have that session and feel even worse. Nothing feels fixed.

For a long time, it’s like going to the fucking gym.

Four out of five sessions are shit.

You feel fat and lazy and disgusting, but that one day comes and it’s all worth it.

People who have mental health issues, this shame that they feel, the worry

Especially in men, my dad passed away and I finished our show.

I’m writing into next season and I’m way harder than I thought I was, honestly I am.

It’s the one positive to be drawn out of this fucking horrible year of sadness and anxiety.

I’m writing about it all the time.

I’ll never stop fighting it,  I won’t give in to this feeling.

The more exposed you are to something the better you will be at it.

You’ve got to work through the shit to get to where you wanna be.

Joe: I feel a lot of people who hit around the age of 30, really struggle.

We see lots of suicides around that age.

It’s the age where men start to have to accept they are now a man.

I’m 35 and only just starting to accept it,  I’ve been fighting that for a long time, like Peter Pan or something.

I think it should start at primary level, talking and knowing it’s ok to be sad.

I remember when I was at school there was absolutely nothing about mental health.

Joe: The educational system fails a crazy amount of kids.

It’s not the teachers fault, they’re doing as much as they possibly can.

But what about developing you as an adult, teaching you how to cope.

Why isn’t mental health a part of the process?

I feel like that’s a big thing that we’re missing.

Louis: There’s an aspect of pride as well, people don’t wanna be a burden.

If it is accessible and available, you must try talking therapy.

It isn’t a quick fix, any mental health issue you are in it for a bit, it’s a marathon.

But I guarantee people are way harder than they think they are.

Way, way. They’re capable of so much more.

There’s no amount of shit that you can throw at me that I won’t survive.

I really feel like I’ve been through the mill with it all.

People want to help you and they want you to come to them, you know.

They want you to burden them!

Louis: And people take it as a complement when you trust them with your feelings . . .

Joe: Yeah, exactly. They feel safe with you.

You need to find someone who suffers just like you, and just fucking hold your hand up.

I guarantee over half of the people in the room with you struggle.

And it’s not whinging, you just need to fucking do it, you’re entitled to it.

It actually took me a long time to recognise the difference between depression and anxiety.

I’ve learned anxiety comes in waves, whereas depression is once you’re low…

Just don’t put too much pressure on yourself.

One tiny step at a time. And don’t beat yourself up.

Like today, I’ve been doing that a lot, I’ve been walking around just feeling like an angry wanker.

Louis: But there’s no such thing as normal, is there?

Joe: And who wants to be that anyway right?

Louis: Where would all my funny stories, my personality come from?

Joe: Yeah, you need to remember it’s alright to be upset.

You’re probably tougher than most people so don’t give up.

Anything that was worth doing was fucking hard work, and you know, you’ve got to really work for it.

There’s nothing like the love you can find for yourself if you just take care of yourself.

I’ll give you an example of my anxiety, in the coffee shop I told you about.

There’s this kid that works in a shop, it’s kind of one of the trendy shops in that area.

We always see each other and he says hi.

The next day, I see him again, instead this time he passes through and I start thinking

‘I wonder what the fuck he thinks of me, I’m always sat here on my own’.

I’m looking at those people to validate me, but they will never do that.

Plus that fella who walked past me, he will have went to work and not thought anything further about it!

Louis – Because he’s too busy worrying about himself.

Joe – He’s worrying about his own shit! I still have those moments.

I’m still irrational and mean to myself, creating these stories and realities that just aren’t true.

But I mentioned that to my therapist and you just need to unpack it.

Like what makes me think I’m so fucking important that he’s thinking about me?

I’ve just gone for a coffee on my own, it’s a very normal human thing to do.

The trick is with these thoughts, if there’s no evidence, then you don’t have a case.

Building your mental health is like building flat pack furniture.

You have all the pieces, you’ve just got to put them together.